In 1950, an unidentified woman in the psych ward at Maison-Blanche in Neuilly-sur-Marne, France, sewed and embroidered a dress in honor of the Queen of England. When she wore it, usually to mass on Sundays, everyone—the nurses and orderlies, other patients—got into the habit of calling her “the queen.”

Another called her guiding angel spirit Myinrist, or my inner rest, working at night by the light of an oil lamp. Another was obsessed with being freed and made a set of master keys out of wood. Another, from Tokyo, dyed fabrics with indigo. Another was concerned with fraying; she frayed everything she could get her hands on.

Some were driven by cocoons and larvae, by metamorphosis. They used willow branches, stripped them into long threads, wove them around batons.

You want to understand something? is what I thought the docent said, me with my rudimentary French.

I had come to Europe with a new love, my first time flying over the ocean. I shimmered with trauma, but we didn’t know if it was the trauma of the violence, still radiant after three years, or because of the trial, which had just happened. As if they were not one and the same trauma.

Yes, I answered the docent, gesturing to a wall of masks made from seashells. They grimaced and grinned in exaggerated shows of emotion like craggy mimes. I would like to know how the getting out happens. I didn’t have better words, so I gestured to my head and my heart, then pulled something imaginary out of myself and arranged it on the wall.

She nodded, crossed her arms. First, she said, switching kindly to English, I suppose you must know what it is inside of you.

What it is inside of me. My mother, ma mére. No, we were closer than that. Maman works for me, as it worked for Camus; adored, but fraught.

I was still having dreams where she appeared as if nothing happened, and I would exclaim that it was a miracle of modern science and recite her social security number so we could get her re-registered as living. In other dreams, he appeared, the boyfriend, in the same brown suit he wore to the trial, looming heavily in the background. I would try to warn her that he ends up doing something bad to her, if only I could remember what it was. In other dreams, it was like when I was a teenager, and we shared a pizza among hills of laundry, dirty and clean, like nothing happened. In other dreams, it was my job to kill her all over again.

The afflicted, the docent said, they are better at this than you and I. Perhaps they do not hear the other noise so much—they have more, what is it? Then she said some words in French that I did not know, could not properly repeat later for a friend, who just shook her head and said I don’t recognize this at all. Please? I asked the docent. Keep trying another way? She only repeated the phrase, this thing they had, the afflicted artists.

One started making wreaths when her parents died, and when she made them she repeated the same motions over and over, as if she could not bear to stop and detach herself from the work. It had its own room, this wreath of straw, pine boughs, shreds of nightgowns, wound around each other. Over in one corner, twine, corn husks, frayed yarn. Up top, perhaps she inherited some silk pajamas, a blue shimmering vein like aquamarine in a rock wall.

After it happened, the victim services counselor told me to go on with my life, to not wait around for the trial, because we had no idea when it would be. A year, many years. I enrolled in a graduate program, moved halfway across the country. My thesis advisor told me not to try so hard to get it right. You will work this story out forever, the story of your murdered mother, he said. Even when you think you’re writing something completely different. You will tell it again and again and again, and you will not get it right. You will fail at the one thing you want so desperately not to fail at. I suppose this should have felt like relief, like permission. It felt like affliction.

Some embroidered texts. Some embroidered protective spells, numbers, talismans, on tapestries ranging in size from postage stamp to picture window. Some concealed objects by wrapping them with wire, string, cord—anything they could find. Some created the sun, dazzling yellow and red and orange spirals and spheres, over and over and over, on top of other works, overlapping each other, spilling onto floorboards and tiles, even stitched to the insides of their clothing because the sun is never just one thing. 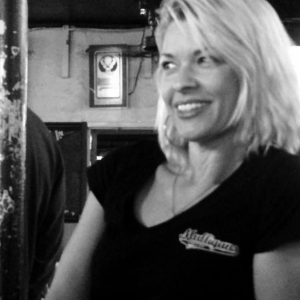 Erin McReynolds has an MFA from Queens University’s low-residency program and her work has been published in North American Review, Memoir Journal, Split Lip, Rkvry, and others. She is currently an editor at American Short Fiction, and after a decade and a half hopping from her homeland Southern California to Austin to NYC, she’s back where it all began, working on a memoir.