Juggling lovers is most effective underneath an overcast sky. Clouds are neither enemy nor ally. But gravity doesn’t change just because sunlight chooses to be discreet. And women come crashing back down to earth harder than bowling pins—the blonde-redhead split being the most difficult shot in existence. Rotating such company requires the most precise of conditions, chiefly: remembering the correct name of each female when on dates. The difficulty in keeping bodies balanced in the atmosphere is adjusting for the wind, and maintaining the conscience in constant motion. The best jugglers transition into gigolos, but the best gigolos become jaded and fade off into fog. If you ever see a woman who appears to be flying (or flailing), bow your head, and pray for a soft landing. 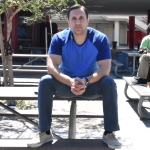 Daniel Romo is the author of Apologies in Reverse (FutureCycle Press, 2019), When Kerosene’s Involved (Mojave River Press, 2014), and Romancing Gravity (Silver Birch Press, 2013). His poetry can be found in The Los Angeles Review, The Good Man Project, Barrelhouse, Gargoyle, and elsewhere. He holds an M.F.A. in Creative Writing from Queens University of Charlotte, and he is an Associate Poetry Editor at Backbone Press. He lives, bench presses, and rides his folding bike in Long Beach, California. Find out more at his website.