Travis Karlson made an early start that morning, and by the time he swung left on Warnock Springs road, the light was rising and the shadows of red oaks and loblolly pines were lengthening across the pavement. The sun cast a skin of silver light across the surface of an irrigation pond, and a smoky mist curled from a stand of trees in the distance.

In a few weeks, he’d be leaving the state for good, going east again, back home, and he knew he’d never return. Since the death of his little girl, there had been nothing here for him, no reason to remain. But he wanted to see the park before he left. A friend from work, someone he trusted implicitly, had told him that there was something strange about the place, something wonderful. “Be careful, though,” she added, watching Travis from the corners of her eyes. When he asked her what she meant, she only shook her head and smiled.

He drove north on narrow country roads. The ground rose gradually into low rolling hills, the roadside lined with Queen Anne’s lace and black-eyed Susans skimmed by butterflies—southern belle, mourning cloak, common wood nymph —and an hour later, he arrived at the park. He’d expected a gate, a place to sign in, but the sleepy old town itself was the park, founded at a crossroads where two Indian trails met. A sign with an arrow led to the Visitors Center. He parked at the edge of the lawn and climbed out of his car.

The place seemed stitched out of silence and shadows. There was blood in the earth under the quiet trees: he could feel it. Thousands of people had come through town on the Trail of Tears, Choctaw, Chickasaw, Cherokee, and Creek; then Crockett and Bowie on the way to their deaths in Texas.

The Visitors Center was a redbrick house with tall, narrow windows, the roof crowned with a widow’s watch. On either side of the entrance stood a massive catalpa tree, each gray trunk five feet across, the roots like fingers gripping into the earth, holding on. Pushing open the heavy wooden door, Travis was greeted by an old black woman with yellow eyes. She was seated at a desk, her voice rusty as if she wasn’t used to speaking. She invited Travis to look around, offered him a map with the restored historical houses marked and numbered. He wandered through the rooms of exhibits, bits of wreckage from the past: china teacups, some tarnished silver spoons, a musket, a child’s white cotton dress and matching cap.

He was relieved to get outside. As the afternoon came on, the September day grew warmer, the sun hot on his neck and shoulders. Map in hand, Travis began to walk the streets, and again the stillness closed in, only the lush catalpa and pecan trees moving in an occasional breath of wind, their shadows moving over the roofs. His steps rattled through fallen magnolia leaves, too loud, intrusive. Though the peace was welcome after the bustle and chatter of work, there was something unsettling about it; it was too pronounced, obliterating, as if the hot blue sky had lowered a bell jar over the town. The few other walkers Travis encountered seemed as much under a spell as he was. They smiled and passed without speaking.

On the edge of town, on a rise above the street where the road led uphill into forest, stood the 1836 courthouse, seat of the state’s Confederate government after Little Rock fell to Union troops. Circling the building, looking for a way in, Travis saw his own pale face reflected in one dark window after another.

The Block House, the Crouch House, the restored blacksmith shop. All the doors were locked – a spider’s web in a corner of the porch, a hornet’s nest in the eaves. The residents inside, for now, stayed mute and out of sight. Among the numbered historical sites with their plaques at the curb were scattered newer Edwardian cottages that seemed to be family homes, one with a tricycle abandoned in the weedy front yard. It looked as if the child had just run off to begin some other game. For a long time, he stood out front watching the place for any sign of life. A Raggedy Ann doll sat in a cane-backed chair on the porch, staring back at him. Travis tried to imagine what it would be like to live on that street, buried by shadows, by the weight of so much history, the division between the past and the present nearly erased. At that moment, all he wanted was to lie in the ground there, silent and still, and let the leaves fall and settle over him until the world came to an end.

Back at the Visitors Center, he asked the woman behind the desk, “Are those private homes I saw in town? Do people actually live in the park?”

“Oh no,” she said, eyes wide, alarmed at the prospect.

Travis told himself that there was nothing else to see, that it was time to leave, but the spell of the old houses under the trees was difficult to resist. He wasn’t ready to go. He asked the woman if there was some place in town to stay, and she told him in her rusty voice that the old city jail had been converted to a hotel. Stepping out the door, she pointed across the street, and there, tucked behind the Methodist church, the white paint of its steeple fading in the sunlight, stood a two-story house with a flowering arbor over the entrance, the path to the door lined with pink gillyflowers.

The room he took had the original pine floor, step-softened and darkened by time, a brass bed with a patchwork quilt, and a window that looked back at an angle through the tree-lined lot to the broad lawn of the Visitors Center. The hand-blown glass bent and distorted the outside world. Exhausted by his long walk, by the heat and heavy silence of the place, Travis leaned back in the leather chair in the corner, closed his eyes to rest for a moment, and soon fell asleep.

When he woke, twilight was pushing its strange blue face against the glass. Travis stepped to the window and looked past the line of trees. In the distance, fireflies, the last of the season, flashed and answered over the Visitors Center lawn. As he watched, a little girl, maybe six years old, ran suddenly across the grass in the gathering darkness. She wore a white cotton dress and matching cap, her pale blonde hair streaming behind her.

In an instant, he was down the stairs and out, sprinting through the lot toward the lawn beyond. The first stars winked above the blackening shapes of the trees, and he saw the white dress flickering past the houses on the far block, going deep into the heart of the dark town, always more distant, urging him on through last year’s fallen leaves as he hurried after her.

James Ulmer’s most recent collection of stories, The Fire Doll, won the George Garret Fiction Prize and was published by Texas Review Press. Recent stories have appeared in The South Carolina Review, storySouth, Arkansas Review, Sequestrum, and elsewhere. Ulmer is currently Chair of the Department of Modern Languages at Southern Arkansas University. 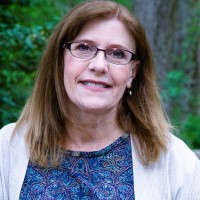