Shawna isn’t one of the parents who can read or flip through their phone during practice and games. She has to watch. Not out of pleasure, but out of fear. To be ready when the inevitable happens. The collision. The kick to the face. The broken leg. The moment that will require a trip to the emergency room. She has already planned out the route. She always has a route planned because it can happen so quickly. Look at what happened to that boy before half-time.

Practices actually make her more nervous than games because there are no referees, the kids aren’t as well supervised, and fewer people pay attention. The children goof around more. People see the injuries in the games, but she is convinced more of them happened during practice. Look what happened last year. That boy who had been standing on the monkey bars and tripped. He had flipped sideways, and his head hit a railing then the ground. He had broken his arm and collarbone and gotten a concussion. Some said he didn’t walk or talk the same afterwards. Of course, some people talked about him breaking his neck, being a paraplegic, dying; even some of the boys from his team who knew better. But the real story was bad enough.

It makes her flinch every time she sees a kid run into the back of the goal or circle around behind. It is easy to catch a cleat and twist an ankle or wrench a knee. Sometimes they push in so far, their necks and faces end up pressed against the netting. They laugh, and it horrifies her.

Last year she’d had a professor who had brought in part of his butterfly collection for everyone to admire. Shawna had refused to concede that his “specimens” were beautiful. She didn’t understand a practice that says, “I love this fragile beautiful creature so much I’m going to pierce it, pin it, and put it under glass.” And the nets, the nets were more torture instruments than tools. When had these become symbols of a carefree childhood? She had said some of this, and it had annoyed the professor who had tried to dismiss and belittle her comments. After that, he began mocking her in class and her work began receiving lower grades. She had gone to the Dean to lodge a complaint. Under the guise of giving professional advice, he had warned her to not make waves, or do something that would make it harder for her to be successful in the program. “Isn’t it already difficult enough for you….” he had asked, leaving the rest unsaid.

Brian hadn’t been supportive either. His attitude had been the same as the Dean’s. Why fight something like that? Why draw attention to yourself? Just let it go. It had been the same with the names. They had named their sons with such care and then people had given them nicknames — people they didn’t even know — and Brian acted like it didn’t bother him.

The coach had begun calling Gabriel “Gabe.” He would yell, Gabe, go to space or Gabe, take the kick. Each time, Shawna would add “riel” under her breath. That was her son’s name: Gabriel. That was how she had introduced him. When the coach had started calling him Gabe, she had thought he was being a deliberate asshole, asserting his authority, then she realized he was just making it easy for himself. For a while she had made the point of standing close to the sidelines and saying Gabriel out loud, but that had been lost on the coach, and soon all the teammates started calling him Gabe as well. She had asked Gabriel about it once after practice, and he said he didn’t care, but she knew he did. Or at least he had once. Maybe he was getting used to it, becoming inured, becoming Gabe. Maybe she was losing her son a syllable at a time.

Part of her recognized that at least the coach knew her son’s names. Some coaches didn’t bother. They would come up with nicknames in that fake, jolly, obnoxious way, particularly if the names were Hispanic or “foreign” or black. Princess T instead of Tanisha. Or Mister Man instead Rigoberto. The kids saw through it. Some of them. The smart ones. But they let it go, thinking they didn’t have the power to change it. They lost their names, and they lost themselves.

“Let it go” was always Brian’s advice as well. His motto. His mantra. His life philosophy. He didn’t support her in this. He didn’t support what he termed her “name campaign” or what he called the “butterfly brouhaha.” He had a mocking label for anything he wanted to dismiss. He would have been happy if she would have quit the program. Within the school system, the degree wouldn’t mean she would make more money, so what was the point? He would rather she not work at all; it would be nice if she stayed at home, and maybe, he “joked,” step into the kitchen occasionally, although he did appreciate that her working limited her ability to fuss at the boys. Fussing, that’s what he called it.

The “Fuss Over Fishing,” that had been the fight at Christmas. She hadn’t known that Brian had bought the boys, not just fishing poles, but nets. Nets, for God’s sake, and him saying, “Jesus, relax, they’re not for butterflies.” A few mornings later, she had gone outside to find the net over Orion’s head, and Gabriel dragging him around. They were playing Planet of the Apes. She hadn’t been able to stop the flood of images. Slave catchers. Her sons cuffed and manacled and caged. Then Brian yelling at her, “Would you just let the kids play! Let the boys be boys. Let it go!”

He didn’t understand. There was danger everywhere. It couldn’t be avoided, just minimized. She ordered pizza and Chinese food and relied on Lunchables and Hostess snacks because the kitchen was a deathtrap. A place of flames, knives, hot metal, glass, corners, edges. She tried to keep her sons out of it, but already they were eating machines, constantly grazing and gulping. Once she had seen Orion yanking on the refrigerator door. He was moving the whole appliance and, in her mind, it was rocking almost to the tipping point. She saw it crushing him. She saw it clearly.

When they were younger, it had been easier because everyone recognized babies needed to be protected. Plastic guards and rubber bumpers were normal. Constant vigilance was good parenting. Then, that changed. Her protectiveness was seen as negative. She was supposed to let her children fall down, break things. Let boys be boys. Let them go. Let them hurt something, someone. Let them get hurt.

And they would. Anyone paying attention to the news could see that. Look what happened to black boys. Everyday. Even that kid who fell last year. How many times had she let Gabriel and Orion play on monkey bars? Including walking on the top. Look what could have happened to them. After that, she hadn’t wanted them to come back to the park, but she hadn’t said anything, and then Gabriel had begun using the accident to argue that he should be allowed to play football. If he could break his neck on a jungle gym, if he could get hurt playing any sport, then he should play the sports he wanted, and he liked football more than soccer. He thought it was a clever argument, Brian did too, but it made no sense to her. Still, her son had persisted, saying, “Mama, you know I can get hurt just walking down the street.” Yes, she did. Yes, she does. That’s what she is afraid of. It can happen so quickly. That’s why she pays attention. 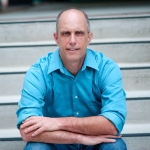 Joseph Mills is a faculty member at the University of North Carolina School of the Arts. He has published several collections of poetry with Press 53, most recently Exit pursued by a bear and Angels, Thieves, and Winemakers (2nd edition). He’s currently working on a fiction manuscript entitled “Bleachers.” Find out more about Joseph Mills and his work at his website.