Two VW bugs and a ‘56 Olds parked.
It’s where live acts went up
and when I got the call
at midnight to meet a friend
I asked no questions and watched
a standard-beautiful blond
strip, surprising the audience
when she dropped her last garment
to reveal a full- fledged penis,
an authentic cock which disturbed
the predominately straight audience
including me for having ogled
at tits and legs, but not prepared
to challenge those urges.
When I left a policeman stopped me,
said he had reason to believe
I was dealing drugs, steered me in
a hallway and frisked me, lingering
on my ass, one hand on
his revolver.  He roamed
my frozen 19 year-old body.
But back to the awning with a banner:
“Warhol live, the Velvet Underground Party Event.”
Two guys in the doorway.
Everything wet from rain.

There’s my grandmother again with her
wide jaw, sag, and always seated, a lump
of Yiddish who is friendly beyond the scare
of wrinkles and sounds. Welcome hugs
and wet kisses. But this woman has a picture
of Christ hanging on the door of the Endicott,
101 west 81st Street at Columbus Avenue, Oct 4, 1969.
No matter: the cheekbones, glasses,
the intense showdown with the camera,
an opinionated grasp of her hands holding
onto the old country with bones and veins.
She is alone in this photo far from challah
and chicken soup, but on this chair,
on this tray, she is served to us.
We lift her or kneel down and
let her smother our little bodies

Four Photos of the Church Disco on p. 42

For rich hippies, out-of-work royalty
where my girlfriend worked the coat room.
Garments were left, forgotten and retrieved
by her-for-me, like that suede dungaree jacket,
a smooth cream-colored affair
and how I fell for a blue navy turtleneck.
This girlfriend later changed her name,
became a sufi and her guru revealed
I had killed her in a prior life, heaved a stone
at her head on an unnamed beach
and when she shared this murder,
I had no recollection, but apologized
as I had for many things in this life.
Here the females at the church on April 24, 1969
are dressed with whips and chains,
one with a bikini bottom, another, bald-headed with
a braided wig. There’s one in an unassuming dress
with half-exposed breasts exposing me
to my desire and, yes, I might have asked her to dance
on April 24, 1969 in my suede jacket
and blue turtleneck while Joan
was still Joan and working the coat room.

Where the deprived are deprived.
One, naked sits on a chair with his legs
crossed. Another finds peace
in sleep in the corner.
A boy contorts in a yoga-like
pose.  It’s the destination
for the forgotten, for those who can’t
dress themselves.  A girl outside
the frame screams and bites
her knees and wrists. Her name is Cindy.
She has three different voices.
All originate from the stains and grime
that cover the walls; All are ominous.
Now she rocks back and forth
to the lullabies she never heard.
She finds comfort in her sway.
The residents in a lower photo
lie down with a camera above
to shock us into legal action.
The bones of these infants could have been
shipped from Buchenwald.
The pencil-thin legs reveal starvation.
You can see below the skin,
into the hollows. Stop and weep
a few moments and then return.
Return to the boy’s face
who looks like I did as a boy.

The riders on the ferry
are in shadow while downtown is lit
except for darkness
creeping up from the street,
a shade that matches
the bodies in the foreground.
Everything stationary. The crowd’s favorite show is
Twilight Zone and they all play their parts
approaching the island.
Everyone is invited.
The boy on the left
considers leaping off.
No one would notice. Four people a day
are killed in the city.
Few make the 11 o’clock news.
I am on the lower level drinking
coffee and biting into a hot dog.
I wouldn’t hear the splash.
My bicycle is with me, a Raleigh.
I will ride through the clusters
of buildings to Union Square
where Klein’s Department Store
sits on its throne.  I will then pedal
to 134 East 17thStreet,
carry my bike up five flights,
open the window in my apartment
that looks out at another apartment
and hope that the girl, imprisoned
by a fast-talking dilettante,
will once again dash across the kitchen,
naked and in full view. 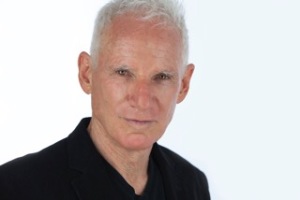 “Anarchy, Protest & Rebellion,” a photographic memoir from the 60s assembled by Fred W. McDarraj was the source of my inspiration for these poems. I used each photo as a prompt. Some might call these ekphrasic poems. I don’t. I took off from the photo. I would simply look at the photo and write.

I rarely used a prompt so this has been an exciting process. My strategy in writing is influenced by William Stafford: Just start anywhere and write, see where it goes. He would write a poem a day. If he didn’t think the poem was any good, he would just lower his standards—not a bad strategy for life in general.

For me writing poetry encourages a feeling of wholeness; not only do I discover or uncover a part of myself but also, if I am lucky, in the process I find a balance of music and meaning in the language.

Some time ago I heard poet, Cecilia Wolloch read; she said (I am paraphrasing) “I am going to read a poem written about a place. I was distracted and didn’t think I noticed anything. It seemed as if I wasn’t really there.” When writing the poem, she continued, “I realized to my surprise I recalled many intricate details.” Well, I could say the same thing regarding a decade of my life.

More often than not I was familiar with the location, the event or the people depicted in the photos, but like Cecilia I didn’t think I was fully present. I crossed paths with many of the people in the photos. Some were friends. In fact one of my closest friends, Robert David Cohen, was featured in a photo at Judson Church. I was at several of the demonstrations chronicled in the book. There are photos of the “Bread and Puppet Theatre,” a group born out of the protests to the Vietnam War. I performed with them at the Fillmore East. There are photos of The Living Theatre. I saw all their productions and met a few of the members. There is a photo of Tennessee Williams. I had the good fortune to meet him when I was performing on Broadway. There is a photo of Abbie Hoffman. I played him in a play and we later became friends. There is a photo taken at the “Church Disco.” My girlfriend actually did work in the coatroom. In “Hollows,” I was very aware of the scandal and horrible conditions at Willowbrook; I had been working with autistic children at the time. I was at the “Dom,” mentioned in “Ill-Prepared,” There is a photo taken on the Staten Island Ferry. I would ride that ferry countless times. Well on and on my connections became apparent and looking at the photos ignited the realization: I played a part in the cultural and political tapestry of that time. I was not a lead player but I participated.

In essence I felt alienated during that period in my life. I might have been confused or emotionally distant but I did take note of what was around me. Seeing these photos and writing these poems helped me to own my experience. We have all heard people say “poetry saved my life.” In this case it helped me reclaim my history.

Paul Lieber’s second collection of poetry “Interrupted by the Sea,” was published this year (What Books Press.) His first collection, “Chemical Tendencies” (Tebot Bach) was a finalist in the MSR poetry contest. Twice nominated for a Pushcart Prize, Paul produces and hosts “Why Poetry” on Pacifica radio in L.A. and Santa Barbara. His poems have appeared in The Moth, N.Y. Quarterly, Patterson Review, Askew, Poemeleon, Alimentum, and many other journals and anthologies. Paul has taught creative writing in poetry, short stories and playwriting at Loyola Marymount University and facilitates the poetry workshop at Beyond Baroque, the oldest literary institute in Los Angeles. Paul works as an actor and has performed on and off-Broadway and in numerous films and TV shows. Find out more about Paul at paullieber.com.