Mountains and Their Relatives

I woke up on my cot, groggy with the new birth of morning, content with the peace that comes when you forget you aren’t home. I searched for my kit and weapon; the monotone reality of this place sinking in as my mind became more conscious. As I stepped outside, the rugged mountains stared down with their alien, jutting crags; more ominous and ancient than the ones I had seen back home.

I noticed that two sedans were waiting at the gate, some 60 yards away. I still had time to kill before my shift at the shop, so I sipped slow on bad coffee and watched the gate guard speak to the first driver. My rifle sat comfortably in my lap with reassuring weight, though I knew I’d never use it. I was a mechanic, not a grunt. I watched the gate guard call a second man to help him search the vehicles. They used things that looked like dentists mirrors on long extendable arms to pan under the cars, looking for anything out of place.

I felt the blast in my chest before I heard it in my ears; a deep vibration in my gut, then silence. The air turned hot and sticky as an enormous wave of pressure washed over me. My mouth looked for a pocket of air as thick dust caked on my lips and tongue. I remember laughing as the phrase “dust to dust” bounced around my head.

I woke up on my cot, and everything was cool and quiet again. The bad dream hung around my head; two sedans, dentists’ mirrors, and sour coffee on my breath.

I saw him sitting on a pair of duffel bags, quiet and melancholy; a visitor out of place and time. I recognized my uncle’s eyes, but his face had lost its age. He wore a green dress uniform and shoes that shined with a matte, overcast glow. The air was charged with strangeness. I struggled to understand where I was, but my sense of place was caked with dreams like hard-water scum. I’m not one to believe in ghosts, but I’m not one to doubt a thing I see either.

It’s a wet and stormy thing when death comes, damn near torrential when it comes loudly. Paul’s death had come loudly. Fighting demons, faults, dreams, and whatever else will haunt a man had taken all he had, sucked him dry. He took his life under a cottonwood tree in the middle of July. I thought about this as I looked at his weary blue eyes.

His face showed a kind of sad effort, as if he were straining to say something to me. His big hands rested on his knees. The excitement I had known him to possess in life was gone, replaced by calm. That was the eeriest thing to me. It only served to make him seem more foreign in the land of the living.

I tried to speak but my throat was burned dry. I could feel the silence welling up in my throat. I watched Paul and he watched me. He stood up slow and deliberate and moved closer so I could examine him, or so he could examine me. His large presence made me feel like a child again; small and unaware of death or dying.

I watched him reach to lay a hand on my leg, and noticed that there was nothing left below my waist. My mind tried to fill in the blank my vision left, but all I could think about was running. I wanted to take off as fast as I could go and not stop until I felt warm Alabama sunshine and smelled pine trees on the wind.

There’s a moment during a long run where you surrender yourself to total release. You accept the reality that you aren’t going to get as much breath as your body thinks you need; existence boils down to the rhythm of your footsteps thumping on the ground. Inhale, stride, exhale; all that matters is that you are going somewhere. I craved that feeling from somewhere deep that I couldn’t locate.

Paul seemed equally confused, he kept staring at the place my legs should be, his brow knitted into a jutting furrow; he gave me the same powerful, protesting gaze that I imagined getting from the mountains of this place.

“You are small, but we notice you. You are out of place.”

“This is not your home.”

I imagined ramshackle Afghan cities resting on his shoulders. I imagined orange-bearded Afghan shepherds leading scattered herds of Afghan goats to nibble on his hairline. I felt all the hate I had for this place come to boil in my veins. I wanted to smash the cities with my fist and watch the homes and parapets tumble down his shoulders.

I looked to my uncle, the mountain, my anger taking the form of questions. “Why are you here?” “Why am I here?” I felt the old, familiar thirst for violence, as if producing enough clamor could drown out my questions; the means making ends irrelevant.

I was standing in my backyard, home from college when I heard that he had died. News like that is a direct vacuum line to your bloodstream. I imagine it’s the emotional equivalent of dialysis, except you don’t get your blood back. I’d come to see death closely many times after that, but the first time was the most raw.

I was angry at the cold, distilled way he exposed me to the darkness of the world, the cold shadow on the other side of living. It was the same cool underbelly that I had been living in for months now; self-wise mountains and men staring down their noses at me, like I chose to be the occupier of the dark world they created.

My uncle’s hand still rested on the bed and I took it in my own in a sort of prolonged and motionless handshake. I reached beneath the untargeted anger and found an undercurrent of hope; mountains live through bombs and battles, and maybe death isn’t as final as it feels.

I felt my heart returning to my throat. The anesthesia was wearing off. I was lying in a cool bed, on a real mattress in a room with industrial-abstract wallpaper. I was holding the hand of a man in uniformed scrubs in a kind of prolonged and motionless handshake. I tried to listen as he got through with formalities and tried to explain where my legs had gone, but all I could think about was running.

I saw my uncle once more, years later, walking opposite the sidewalk as I wheeled my chair towards the parking lot. He raised one hand in a resigned greeting and turned to walk away.

Maybe he’s storing my legs for me somewhere, and one day he’ll help me snap them back on and watch me take off like a rocket. Sometimes it’s running that seems impossible, sometimes it’s living. In the end all that matters is that you’re going somewhere. Maybe that’s why mountains stare so hard, they’ve stopped going anywhere at all. 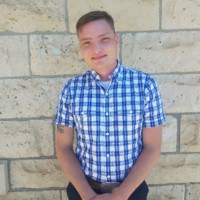 Stephen Comstock is an emerging writer and U.S. Army veteran from South Alabama. His work has previously appeared in The Bitter Southerner. He currently lives in Junction City, Kansas with his partner, Domenique and an Australian Shepherd named Pickles.