I was sitting in a neighbor’s dorm room with a group of people when I noticed a young guy. He had a crew cut, and he was wearing khakis. At one point he said his name was Mike Motel, and I accepted that name, though I didn’t understand it. Maybe he liked to stay in motels, or, more probably, wanted his last name to alliterate with “Mike.” He said he was leading a poetry workshop in the photography darkroom on the ground floor of the dorm. “We meet there and write,” he said. “We don’t mind the photo chemicals. The fumes inspire us.”

Someone else in the room asked what I was studying, and I said, “Architecture.”

“What classes are you taking?”

“Painting and drawing, and some art history.”

“Are those architecture classes?

“I’m in the art department of the architecture college.”

“Oh,” the person said, “those art classes will help you get a job.”

Sometimes, I would leave the art studios and walk into the architecture building to see how the serious students worked. Even if the hour was late, the ceiling lights would be on and the novices would be sitting on stools and drawing over boards.

Once, I decided to work through the night in order to finish a drawing. I sat on a bench at my easel, in an empty studio, and scratched with a pencil on a large sheet of paper. In the middle of the night, I took a break and walked to the architecture building. Sure enough, students were there, developing their plans and schemes. I didn’t talk to them; I just walked through an aisle of drawing tables and out the door.

I knew an architecture student, Raul, who lived in my dorm. He was a solidly built guy with dark, curly hair. He could talk about the style of any building on campus. One of our neighbors, Merry, hung around with him. Her nickname was Rabbit. One time, I saw her sitting on his bed. After she left, he picked up his pillow and put it over his face.

Another time, I heard someone running out of his room. I went in and saw Raul. “The Rabbit is naked!” he said.

He called for the Rabbit, but she didn’t come back.

One of my neighbors told me he had written about me for his freshman seminar. “The assignment was to write about someone you know,” he said, “and I chose you.”

“What did you write?” I asked.

“You talk like you did. But what’s unusual is, you’re a person of color who grew up on a farm.”

“What kind of farm would that be?”

A student from an art history class asked me to study with her, so I went to the house where she lived. We sat in her kitchen at a table, under a bright light. She had straight blond hair and wore jeans and a T-shirt.

We looked at color plates in a textbook and memorized the names of the artists and the dates of the works. We talked about composition by breaking down picture planes into tripartite arrangements: three horizontal bars and three vertical bars. We could see these patterns under the brushstrokes.

“There’s a poetry workshop in my dorm,” I told her. “It’s run by a guy named Mike Motel. He looks conservative, but he’s not.”

Later, she met me at the darkroom. No one else was there. Either the workshop had been canceled, or no one was interested in attending. The door was unlocked, so I opened it and we walked in. I found a light switch and flipped it, but the only lights that came on were the red lights for photo developing. The chemical fumes were strong.

“I’ll ask Mike about this when I see him,” I said.

Slick sheets of paper were clipped to clotheslines crisscrossing the room. I could make out faces on the prints, but none were clear.

“Here’s one,” she said as she pointed to an image of a girl holding an umbrella. The girl was standing in an open, paved area at night. Her back was to the camera, and she was facing a double row of lights mounted in the ground. The lights trailed off before her like the markers on an airport runway.

“It’s a good one,” I said, and I believed it was, though I didn’t know why. Maybe it was because the girl looked older than a girl, though she was the size of a girl.

I went to find Mike Motel. When I knocked on his dorm-room door he called out, “Come in.”

He was standing naked in front of a large window that looked out on campus. His back was to me. He stretched his arms and rubbed his stomach. I could smell him.

“I brought a friend to your workshop,” I said, “but no one was there.”

“I’m not running it anymore. I flunked out.”

“I don’t believe that,” I said. “Maybe you just need to hand in some work.”

“I really flunked out,” he said. “My parents wanted me to major in biology, so I did. I took pre-med biology, and I didn’t pass.”

“I’m going to a different school to study poetry. I’m going to a place in the mountains where there are no grades. You just hand your work around and talk about it.”

I wrote a paper for my art history class and thought my analysis was good. When I saw a notice for a contest, I submitted the paper. I didn’t know how many students entered, but, in time, four finalists were named. I came in third out of the four. I thought the ranking was an honor, and I planned to put the result on my resume.

I told my art history classmate about the award and suggested that we study together again. She seemed interested, but our study date never materialized. I missed sitting in her kitchen under a bright light, just the two of us, while her roommates were not around. 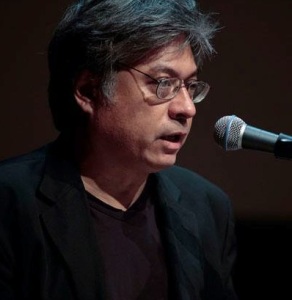 Thaddeus Rutkowski is the author of six books, most recently Border Crossings, a poetry collection. His novel Haywire won the Asian American Writers Workshop’s members’ choice award, and his book Guess and Check won the Electronic Literature bronze award for multicultural fiction. He also received a fiction writing fellowship from the New York Foundation for the Arts.